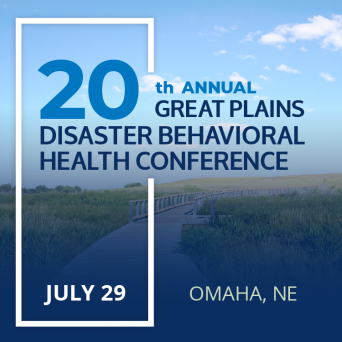 After the 9/11 terrorism attacks, New York officials knew they needed more than the usual in-and-out response to a community crisis, so they worked with PTSD experts like Dr. Jessica Hamblen to develop a long-term mental health response.

“I continued to think about and develop treatment specific to disasters outside my VA work,” said Hamblen of the Geisel School of Medicine at Dartmouth and of the Veterans Affairs National Center for PTSD. “I tried to do research on events and the response to them, what’s working and what’s not. … The core components of treatment have stayed the same.”

In July, Hamblen will be addressing the Great Plains Disaster Behavioral Health Conference in Nebraska, a state that has faced back-to-back disasters with widespread flooding in 2019 and, since 2020, the COVID-19 pandemic.

The conference is focused on learning how to recognize, prepare for, and respond to the psychological effects of disaster and mass casualty events, according to the University of Nebraska Public Policy Center.

The center is a primary organizer along with several co-sponsoring organizations. The 2022 conference marks the 20th anniversary of the collaboration.

The conference will be in person for the first time since 2019.

“It’s always good to bring providers in mental health together for professional development and networking,” said Christian Burgess, a conference speaker who is director of the national Disaster Distress Helpline. “There’s a saying that no one exchanges business cards during a disaster, so now is a time for resource sharing.”

Burgess said he’ll likely be preaching to the choir, but he’ll want to remind professionals to make sure mental health is being addressed alongside shelter, food, clothing, and rebuilding following a disaster.

Burgess said he wants to spread the word that a helpline dedicated to disasters exists 24/7 year-round. The toll-free, multilingual, crisis support service is at 1-800-985-5990. It’s federally funded and operated by the nonprofit Vibrant Emotional Health. Callers can connect with supportive counseling as well as referrals to local disaster-related resources.

Another conference speaker, Dr. Rebecca Wysoske of the University of Nebraska Medical Center, will be sharing about WHOLE (Wellness – How One Lives Effectively), a Nebraska-branded stress-management and resiliency program she and others developed.

The main beneficiaries of the program so far have been nursing students and psychiatric residents. WHOLE teaches meditation, deep-breathing exercises, how stress affects the brain and body and cognitive behavioral techniques that, for example, turn a distorted thought pattern into something more positive.

This summer, all 300 new students will go through the program before they start their nursing studies, Wysoske said.

“The earlier you teach resiliency, the more it helps throughout their schooling and career,” she said. The skills are needed especially now, she said, because the field has lost nurses the last couple of years as they worked the stressful frontlines of the pandemic.

“We want to make sure we’re supporting the nurses out there,” Wysoske said.

Hamblen said over the years she’s grown to better understand the importance of resilience skills like breathing and meditation in recovery from a disaster.

“Just the ability to focus and tune out all the noise around you a couple of times a day has proven to have a positive outcome,” she said.

Mostly Hamblen has focused on cognitive behavior therapy that focuses on how people think and behave and helps them see if there’s a more accurate and helpful way to think about events to make them less distressing.

For example, she said, if someone fears visiting a supermarket following the May 14 mass shooting at a Buffalo, N.Y., store that resulted in 10 deaths, the more accurate thought is that most people go shopping and are safe.

“It’s not telling you that what you think is wrong, but it might be making you more distressed than you need to be,” she said.

Hamblen co-authored Treatment for Postdisaster Distress: A Transdiagnostic Approach, released a year ago. She said while in Omaha she doesn’t plan to present a manual or cookbook, but share about essential ingredients for post-disaster treatment.

“Even with the same ingredients, treatment looks different at the end depending on the individual,” she said, “It’s very personalized. It never looks the same way twice.”

Dr. Hamblen will be featured in a pre-conference workshop July 28 designed for licensed clinicians interested in sharpening their post-disaster CBT skills. Space for this workshop is limited to 50 registrants.