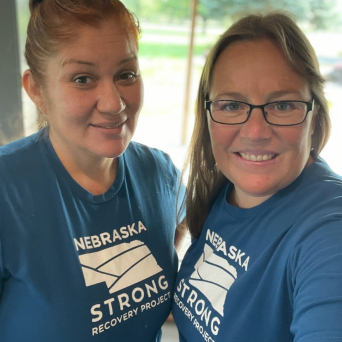 Verdigre librarian Katie Hollmann believes few people in the state’s 22 northern-tier counties served by the Region 4 Nebraska Strong Project team do not know who the team outreach workers are and what services they provide.

When the project formed after widespread flooding in 2019, Britt Foster showed up and asked who had suffered damage, said Hollmann, who was coordinating out-of-town volunteers. Her husband was mayor at the time, so they could provide a list.

“They met people and let them tell what their story was,” Hollmann said.

Even as flood damage was repaired, area residents still have not recovered emotionally. “It’s been two springs and people are still worried,” Hollman said.

And just a year after the floods, the pandemic hit. The Nebraska Strong project in 2020 received $6.7 million in new federal grants to focus on COVID-19.

The project, scheduled to continue through December, is a collaboration of the Nebraska Department of Health and Human Services, the University of Nebraska Public Policy Center, the Nebraska Emergency Management Agency and the state’s six behavioral health regions.

The pandemic turned out to be a disaster unlike any other, said Aaron Adams, network program specialist at DHHS’s division of behavioral health.

“Usually, a disaster affects very specific families or locations, but this was everyone, including the outreach workers themselves,” Adams said. “The scope was much broader than other situations.”

The project’s outreach workers, he said, “really rose to the challenge to find ways, whether virtually or in person, to support people.”

Adams said he was continually impressed by each regional team’s ability to be flexible and creative to adapt to the needs they saw.

COVID-19 is a polarizing topic, he said, and communities needed to be approached according to, for example, how open local businesses were to masked outreach workers and to displaying information about coping with the pandemic.

In many cases, outreach workers said, the common ground was a focus on stress and anxiety, whatever the source, and on paying attention to self-care and neighbors in need.

The Nebraska Strong teams have taken advantage of team members’ talents to come up with creative ways to engage residents. Foster, for example, teaches yoga for adults, children and, for seniors, she teaches chair yoga. Region 4, based in Norfolk, also has an artist who teaches “Bob Ross-style classes.”

When the coronavirus prevented in-person meetings, team members found other ways to connect, such as book club by chat or paint parties by Zoom. They used local email lists and Facebook.

Outreach workers made sure they were at community parades and cruise nights, often fashioning tip sheets into fans stapled to sticks.

They also made sure local first responders knew what Nebraska Strong was about and the resources available to them and the public, Foster said. Training sessions focused on such topics as self-care and compassion fatigue.

The Nebraska Strong project distributes a lot of printed materials, whether business cards, postcards, posters, flyers, brochures or children’s coloring pages. They advertise tips and the Nebraska Family Helpline (1-888-866-8660) and the Rural Response Hotline (1-800-464-0258). Both statewide hotlines will continue to offer support to Nebraskans after the grant supporting the Nebraska Strong Recovery Project ends on December 26.

A lot of calls have had to do with financial needs, Foster said, but there’s also been a need for mental health services. Region 4 had vouchers for people to connect with local practitioners. Foster said, and as of Sept. 26, 2,076 of 2,309 vouchers had been used.

“What we see is people really needing to connect with other people,” Foster said.

She is most proud of the relationships Nebraska Strong has built with the region’s tribal communities. They have been welcoming at community centers and mom meetups.

Holmann described Foster and other Nebraska Strong outreach workers as “persistent in a nice way.”

“Whenever there was a gathering of people, they just made sure they were there to make themselves available.”