Expanding the Reach of Suicide Prevention with "Nebraska Needs You" 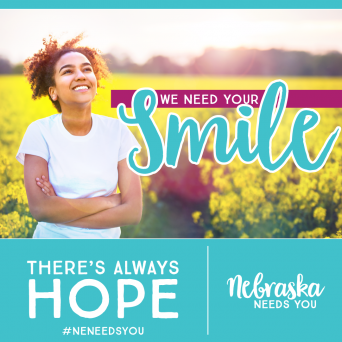 “We need your smile, creativity, ideas, kindness, care and spark. There is only one you, and we need you here.”

As of late September, some 5 million people were exposed to that and similar positive, empowering messages through a campaign via digital, print, TV and radio. More than a dozen agencies and organizations still are collaborating to spread the messages statewide.

Calls to the Nebraska Family Helpline (888) 866-8660 spiked 86 percent from the same period the previous year.

“It highlights how something kind of small with multiple partners came together to spread a message of suicide prevention,” said Quinn Lewandowski, a senior research specialist with the University of Nebraska Public Policy Center.

The center dusted off a previous campaign from Nebraska Extension, enhanced the messaging, provided sample content and the Nebraska Department of Health and Human Services made the connections and updates to the messaging with more than a dozen partners to promote hope and resource information statewide.

Lewandowski said the updated statewide campaign grew out of Nebraska First Lady Susanne Shore’s concern about an uptick in suicide attempts. A task force was put together to address the issue with a fall and winter 2021 media campaign.

Lewandowski saw the opportunity to use an updated existing campaign -- Nebraska needs you. “We [Nebraska Extension and the University of Nebraska Public Policy Center] served as the catalyst to enhance an existing excellent low-budget campaign to a platform where it could flourish in a time of need,” he said.

That campaign was developed to address rural youth in the wake of devastating flooding in 2019, and now is being used for all ages statewide during another crisis, the COVID-19 pandemic. The campaign has taken advantage of COVID relief grants to DHHS.

Seeing the tagline and empowering messages revived has been gratifying for Holly Hatton-Bowers, an assistant professor in child, youth and family studies and an early childhood extension specialist at the University of Nebraska-Lincoln.

“I think it’s one effective way to reduce the stigma around mental health and suicide,” she said. “It gives me more hope that the message will be disseminated more widely.”

She was part of the Extension team that did an early, nine-month suicide-prevention campaign that she said was designed to promote hope, resilience and connectedness among rural 12- to 18-year-olds.

Messages using the social media networks favored by young people urged that it’s OK to ask for help, reminded people that they were not alone and pointed out that help is available.

In general, the campaign promotes that being strong means reaching out for support when you need it or when you see others need it, Hatton-Bowers said.

She said the early and current campaign have benefited from the enthusiastic participation of an array of partners -- in sheer numbers of people reached, the variety of demographics served and the “co-creative process that made it more impactful.”

During a September press conference for Suicide Prevention Awareness Month, Sheri Dawson, director of DHHS’s Division of Behavioral Health, said the hope was the campaign would make starting conversations easier.

“Use your eyes, ears, heart and mind to reach out and offer help if someone is suicidal,” she said. “If you’re unsure if someone is thinking of ending his/her life, ask.”