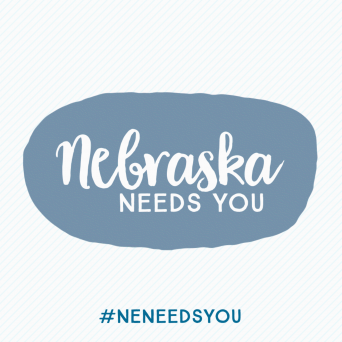 The "Nebraska Needs You" statewide suicide prevention campaign is working with suicide prevention groups around the state to help raise awareness and help people know the warning signs. In honor of Suicide Prevention Awareness Month, which happens in September, a new statewide multimedia campaign is intending "to remind Nebraskans that there is help and hope readily available all across the state, no matter how bleak things might seem." The campaign will include print ads, TV, radio, and digital material with the hope that it will make starting the conversation easier, raise awareness about the issue, and help connect services to the people who need them.

According to Research Specialist Quinn Lewandowski, the “Nebraska Needs You” campaign originated from Nebraska Extension’s Rural Family Stress and Wellness Workgroup after the historic 2019 Nebraska Floods to reach rural youth who may be at risk for suicide or struggling with mental health challenges. The campaign set out to promote hope, resilience and connectedness among rural youth in Nebraska by sharing positive and empowering key messages that will encourage them to see their worth, take care of their mental health, and to reach out for help if they or someone they know is considering suicide. Dr. Denise Bulling and Quinn Lewandowski, both of the University of Nebraska Public Policy Center, have been involved with the Rural Family Stress and Wellness Group, and the SAMHSA GLS Youth Suicide Prevention Grant Team that took part in the first campaign, which ran from December 2019 to September 2021.

After the success on the 2019/20 campaign, Quinn Lewandowski and Nebraska Extension’s Holly Hatton-Bowers spoke extensively about continuing the campaign utilizing existing resources to increase the campaign’s reach since the amount of stress had only increased with the onset of the COVID-19 pandemic. Around that same time, Lewandowski says "the Nebraska DHHS organized a Suicide Prevention Stakeholder meeting to develop an extensive social media and educational campaign to promote hope, healing, and resources in Nebraska. Naturally, this was a perfect opportunity to take 'Nebraska Needs You' to all Nebraskans."

"Overall, I’m very excited to see this campaign roll out to Nebraska. Not because I’m involved in suicide prevention at the local and state level, but because this campaign embodies the spirit of Nebraska. Many stakeholders, leaders, and innovators have come together not as representatives of organization to make this campaign possible, but as Nebraskans with a singular goal of reaching out to their family, friends, and neighbors to let them know that there is hope and help readily available from a host of local resources no matter where they are," says Lewandowski.

“We know that it can be hard to start conversations about mental health, but they are very important conversations and could save a life,” said Sheri Dawson, director of the Division of Behavioral Health. “It is never too early to talk about mental health and we don’t want the conversation to be too late. Use your eyes, ears, heart, and mind to reach out and offer help if someone is suicidal. If you’re unsure if someone is thinking of ending his/her life, ask.”

"Each of us – community members, survivors, educators, media, advocates, young and old alike – can play a contributing role in changing the statistics and saving lives from suicide," added Julia Hebenstreit, executive director of the Kim Foundation.

The topic of suicide prevention was the topic of a recent press conference held by Governor Pete Ricketts. “Our state has been very proactive in ensuring that Nebraskans have access to behavioral health resources," said Governor Ricketts. “These efforts have shown success. According to U.S. News and World Report, Nebraska ranks 4th nationally in mental health. In September, we're spotlighting the mental health resources available to Nebraskans, as well as introducing our new suicide prevention media campaign—'Nebraska Needs You'."

Visit the link below to learn more about some of the warning signs of suicide and what to do if you know someone who is considering suicide.