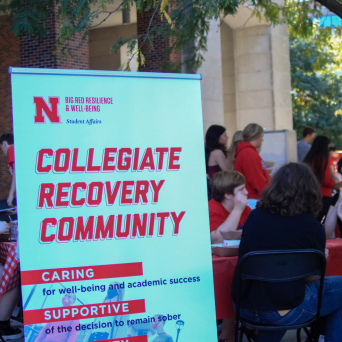 Big Red Resilience and Well-Being is getting a boost through a new, three-year federal grant and matching university funds.

The University of Nebraska–Lincoln suicide prevention program — known in part for its training of students, faculty and staff to be well-being ambassadors — started in 2018 but was interrupted when the pandemic forced remote learning by students scattered around the country.

Because of the disruption, the university had the rare opportunity for a second grant of $102,000 a year for three years starting Oct. 1. Nebraska U is providing a 100% match for the three years.

“We want to get the word out that UNL is actively working to prevent suicide, and the university is committing a match for this because it’s that important,” said Denise Bulling, senior research director at the University of Nebraska Public Policy Center.

The center is partnering with Big Red Resilience and Well-Being on administering the grant, including setting and measuring goals aimed at building a suicide-safe campus.

Connie Boehm, director of Big Red Resilience, said the new grant allows the program to pick up activities interrupted by COVID-19, but also proposes some new areas of focus.

A key addition: addressing the role of substance abuse in suicide by reaching out to and creating opportunities for students in substance use recovery, such as a sober tailgate event planned for 11:30 a.m. Oct. 29 on the Meier Commons.

Sober tailgates aim to promote how to have fun without alcohol, how to battle pressure to drink, and to encourage students in recovery to interact with each other.

One event earlier this season attracted about 150 people, Boehm said.

“We’re not hiding that suicide is a public health issue,” Ragain said. “We’re letting people know they’re not alone and resources are available to them.”

She said students also will see “Hi, How are you, Really?” popups on campus where they’re invited to talk openly about their mental health and well-being and can complete a brief, anonymous screening to see recommendations and resources.

Since 2018, Boehm said 6,500 faculty, staff and students have gone through REACH training, 90-minute sessions led by certified trainers to teach warning signs of suicide and how to intervene.

The goal, Boehm said, is for students to be able to reach out to friends and get connected to help early.

The new grant, the proposal says, aims to develop a university-specific training program that can be adapted for online or virtual delivery and that also can be used for rural families with poor broadband access.

The grant will also allow for the rebranding of suicide prevention materials to include the new national 988 suicide and crisis lifeline number and to make sure campus resources are part of the call center’s referrals.

As of mid-July, 988 offers 24/7 call, text or chat access to trained crisis counselors.

Bulling said college campuses can expect to see mental health issues related to the pandemic for some time. Students are coming up who had their high school years disrupted. Families may have experienced deaths, separation or job loss.

“We’re gearing up to do everything we can to ensure we can give quick access to mental health resources when they need them,” Bulling said.