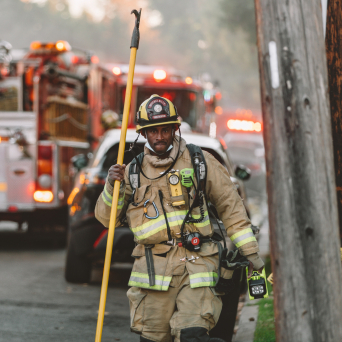 In the aftermath of a suicide, those responding to the scene — loved ones and first responders — need care and information.

In response, Nebraska is about to distribute wallet cards designed to be quickly available references for these tragic situations.

The cards are a project by the University of Nebraska Public Policy Center. Quinn Lewandowski, a senior research specialist at the center, has worked with other suicide prevention experts and representatives of first-responding agencies to produce the folded cards packed with information.

The goal is for the cards to be good reminders of how to approach survivors of sudden loss potentially facing a wide range of feelings — shock, confusion, denial, grief, anger, guilt or shame — and provide them with a list of resources, Lewandowski said.

“Being first on the scene, it’s important for first responders to be there for survivors,” he said.

The cards also include reminders for officers, detectives, firefighters and others working a suicide scene to pay attention to their own and their team members’ stress levels in the days and weeks following the event, said Lewandowski and Don Belau, a school psychologist and partner on the project.

“After a loss call, a team member’s own losses can flood,” Belau said. “They may need to talk and process.”

Belau serves on his Local Outreach to Suicide Survivors team, which includes survivor and mental health volunteers who reach out to families when a suicide happens.

The response to a suicide loss is important because research shows those closest to the person who died are at risk of self-harm, including substance abuse and their own suicide. First responders are also at risk because of the trauma and stress of their jobs.

Lewandowski said the idea for the wallet cards grew out of seeing the impact on members from a fire station that had responded to a suicide.

“That particular scene hit hard with team members,” he said. “It clearly impacted them in a significant way. We got to thinking how to most effectively get to these people. They’re busy, working different shifts, so it’s hard to get together to talk. This is simple-to-use guidance.”

The project was funded by using rolled-over savings from a federal suicide prevention grant to print the cards, he said.

Much of the project has involved consulting with responders and others about language, making it helpful and succinct: Express empathy. Be respectful. Acknowledge and be sensitive to the feelings of survivors. Listen. Ask “What can I do to help?”

The cards are a good size if a survivor wants to tuck one away for reference before a LOSS team follows up.

Lewandowski and Belau said they think the cards could be especially helpful with smaller agencies and volunteer fire departments around the state. The first area of emphasis will be southeast Nebraska.

But fire departments and agencies can also make their own cards. Downloadable versions of the cards are available here. Nebraska fire, EMS and law enforcement departments can request cards for their departments here.

Belau said he could see eventually developing magnetized cards to stick inside ambulances where an EMT would glance.

“After a couple of hundred times, it becomes embedded in your conscience,” he said.

Belau said officers he has spoken to are eager to get the cards; one already showed him the pocket where he plans to keep them.

The cost of printing the cards is small “if it helps just one person in a state of emotional crisis by reminding them to seek self-care,” Belau said.