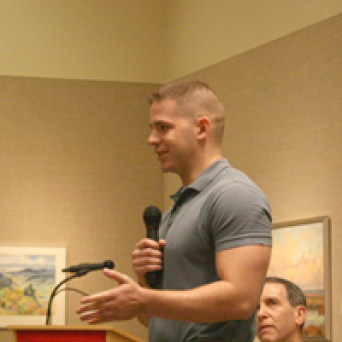 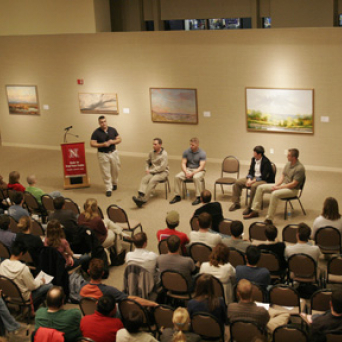 About:
“Don’t Ask, Don’t Tell” Policy is the better-known name of Pub.L. 103-160, a federally mandated set of laws regarding homosexuality in the US military that was first enacted in 1993. The policy prohibits “the presence in the armed forces of persons who demonstrate a propensity or intent to engage in homosexual acts” because their presence “would create an unacceptable risk to the high standards of morale, good order and discipline, and unit cohesion that are the essence of military capability.” The result of this policy is “Don’t Ask, Don’t Tell” so long as there is nondisclosure of sexual orientation, individuals who are homosexual or bisexual are permitted to serve in the military.

On November 8, 2007, the UNL College of Arts and Sciences, University of Nebraska Public Policy Center, UNL LGBTQ Resource Center, as well as the UNL Departments of Political Science and Psychology, hosted a diverse panel of retired military officers and former service members to discuss “’Don’t Ask, Don’t Tell" Policy in the Post-9/11 World.” The panelists come from a wide variety of backgrounds and perspectives, including both gay and straight service members, senior officers, and civil rights activists. After the panel discussion, the panelists took questions from the audience.

Panelists:
Rear Admiral Alan M. Steinman served in the U.S. Coast Guard and U.S. Public Health Service for 25 years. He retired in 1997 as the Coast Guard’s director of health and safety (equivalent to the surgeon general). Since then, he has worked tirelessly for the repeal of the “Don’t Ask, Don’t Tell” law. In 2003, on the 10th anniversary of “Don’t Ask, Don’t Tell,” Steinman came out publicly, becoming the most senior military officer to self-identify as gay. He was a co-founder of the Puget Sound chapter of the American Veterans for Equal Rights and most recently served as the military advisor and senior member of the highly successful Call to Duty Tour.

Jarrod Chlapowski, 25, enlisted in the U.S. Army in 2000 and trained as a Korean linguist and cryptologic voice interceptor. Chlapowski came to terms with his sexuality after joining the Army and, after coming out within his unit, he experienced widespread acceptance by his peers. He was awarded both the Army Achievement Medal and the Army Commendation Medal during his time in the Army; however, Chlapowski chose not to re-enlist because of the excessive burden of the “Don’t Ask, Don’t Tell” law.

In November 2005, Chlapowski teamed up with Alex Nicholson to develop the aggressive Call to Duty Tour, a seven-week public education initiative geared toward putting a human face on the “Don’t Ask, Don’t Tell” issue. Outside of the tour, Chlapowski has spoken before House and Senate staffers regarding the financial costs of “Don’t Ask, Don’t Tell,” and has met with a number of politicians and military leaders.

Alexander Nicholson, 26, enlisted in the U.S. Army in 2001 and trained as a human intelligence collector. When he enlisted, Nicholson already spoke four languages. Just six months after Sept. 11, however, Nicholson’s unit was forced to issue him an involuntary honorable discharge pursuant to the “Don’t Ask, Don’t Tell” law after he was “outed” by a fellow service member in his unit.

Nicholson has met with former chairmen of the Joint Chiefs of Staff and the Senate Armed Services Committee, governors, and numerous members of Congress about the impact of the “Don’t Ask, Don’t Tell” law. He was featured on the cover of The Advocate on Feb. 14, 2006, and is the public plaintiff on one of the three lawsuits currently challenging the “Don’t Ask, Don’t Tell” law in the courts.

Jerre B. Fine, 25, of Stillwater, Oklahoma, enlisted in the United States Air Force upon graduation from high school. Fine trained as a cryptologic Persian linguist, focusing primarily on the Farsi dialect. While training to be a linguist at the Defense Language Institute in Monterey, CA, Fine came out as a lesbian to a select group of friends. Although she personally escaped the pre-9/11 purge of critical linguists from the language school that caught national media attention in 2001 and 2002, Fine was in residence at the school when those large numbers of other service members were being outed and discharged for no other reason than their discovered or perceived sexual orientation.

Although Fine felt alienation and the intense pressure associated with both working in a sensitive high-security environment while also maintaining a secretive personal life, she served for six years before deciding not to re-enlist because of the burden the extra requirements and fear imposed upon gay and lesbian service members by the “Don’t Ask, Don’t Tell” law. During her time in the Air Force, Fine was awarded the National Defense Service Medal, a Good Conduct Medal, and the Global War on Terrorism Medal. She was honorably discharged in 2006 and is now pursuing a degree at the University of Central Oklahoma.

Stephen Vossler joined the Army in 2001 and trained as a Korean linguist and cryptologic voice interceptor. While in residence at the Defense Language Institute, Vossler had a gay roommate. During this time, he also met and befriended Jarrod Chlapowski, whom he later found out was also gay. Though previously unexposed to the idea of gay men and women serving beside him in the military, Vossler formed close friendships with his roommate and Chlapowski, as well as many other fellow service members. Vossler and Chlapowski served side by side in Korea in the 501st Military Intelligence Brigade and at Ft. Lewis, Washington in the 2nd Armored Cavalry Regiment.

Contrary to the presumptions about how straight service members would react negatively to the presence of openly gay co-workers in the military today, Vossler exemplifies the disciplined and professional nature of our modern armed forces and demonstrates the ability of soldiers from all backgrounds to work together despite their differences.

Full audio of the event is available here.