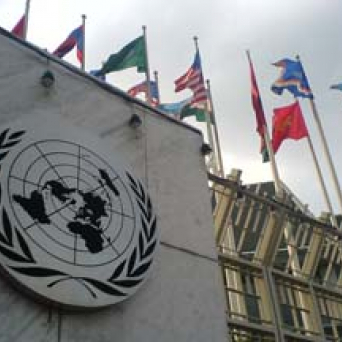 About:
With ongoing United States involvement in the Middle East, South Asia, and Eastern Europe, frequent reference to the term “nation-building” is made by policymakers, commentators, and journalists. What exactly does “nation-building” mean? Why is it important?

Foreign policy and international affairs experts David Jervis, Patrice McMahon, and Bob Switky spoke to the historical and comparative context of “nation-building,” with particular reference to current affairs and unfolding events. The panelists sought to discuss the questions: What are the lessons learned from prior attempts at nation-building? Although often touted by some policymakers as a remedy for failed states and civil wars, is it equally viable as a response to international terrorism? These and other questions will be explored at this seminar, which was held in conjunction with MacNeil/Lehrer Productions’ By the People dialogue in Kearney.

Bob Switky (Assistant Professor, UNK)
Prof. Switky’s teaching and research interests include foreign and defense policy, comparative politics, and international political economy, and his geographic area of specialization is Western Europe. Prof. Switky has presented research papers at professional conferences, including those sponsored by the International Studies Association and the Midwest Political Science Association. Prof. Switky’s current research agenda includes a study of the rationales for a national missile defense system and British foreign policy during World War II. He has co-authored a book on the political importance of regional trading blocs as well as a textbook on World Politics.